Warning: "continue" targeting switch is equivalent to "break". Did you mean to use "continue 2"? in D:\tanduleisurehotel.com\wwwroot\blog\wp-content\plugins\all-in-one-seo-pack\modules\aioseop_opengraph.php on line 844
 The Tata Tea Museum in Munnar – Top Attractions in Munnar | T & U Leisure Hotel Munnar
tanduMay 22, 2018July 14, 2018 Ayurvedic treatments in munnar, hotel in munnar, Luxury hotel in Munnar, Tea museum in munnar, tea plantations, top attractions in munnar No Comments

Tea Museum, previously known as Tata Tea Museum, is currently operated by Kanan Devan Hills Plantations Company (P) Ltd, which is a spin-off company from Tata Tea Ltd in 2005. This is one of the most visited attractions in Munnar. Your visit to Munnar hill station will not complete without spending some time in the Tea Museum, exploring the history of the Tea Plantations. The museum set up at the Nallathanni Estate of Tata Tea ensures that the legacy of those who worked hard to ensure the tea plantations survived this long is recognised publicly.
The museum depicts the history of tea plantations and processing since the earlier times. Most occupation in the region is based on the tea plantations. It is one of the most renowned in the world for its tea. Also, the Tata Tea Company holds the record for being the World’s second largest tea producer and distributor. 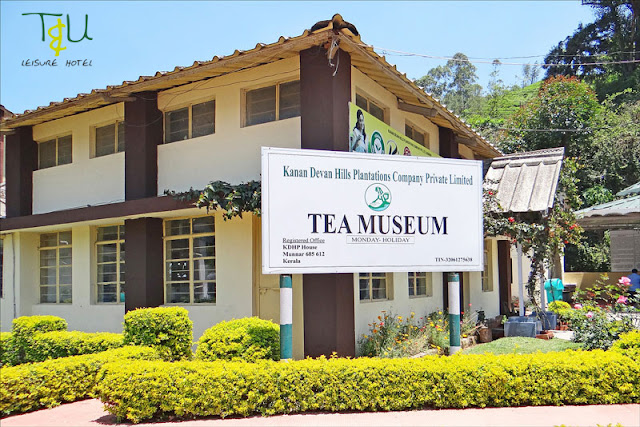 We get to watch the transition from the rudimentary tea roller to the modern fully-automated tea factory. Various stages of tea processing can be seen, which includes the making of black tea. One can also see a sundial, placed on a granite block, which was made in 1913 by the Art Industrial School at Nazareth, Tamil Nadu. It has other attractions like the ‘Pelton Wheel’ used in the power generation plant in the 1920s, tea roller and a rail engine wheel of the Kundale Valley Light Railway. Another section of the Munnar Tata Tea Museum in Kerala also houses wooden bathtub, classic bungalow furniture, typewriters, magneto phone, iron oven, manual calculators etc. of the yesteryears. The other attraction of the Tata Tea Museum in Munnar is the demonstration room for tasting the tea.
You can find several hotels and resorts in Munnar which offers you the opportunity to visit the Tata Tea Museum. Hurry up!
For more details: T & U Leisure Hotel, Munnar
LABELS: BEST HONEYMOON RESORT IN KERALA BEST MUNNAR HOTELS BEST RESORT IN MUNNAR HOTELS IN MUNNAR HOTELS IN MUNNAR TOWN MUNNAR HILL RESORT PREMIUM HOTEL IN MUNNAR VISIT : WWW.TANDULEISUREHOTEL.COM
hotels in munnar, Places to Explore in Munnar, resort in munnar, tea museum in munnar, top attractions in munnar